This is our old blog. Our new blog can be found @ streets-alive.tumblr.com. Visit us there!

On Tuesday, April 24th, a group of UC Berkeley campus and community members and our newest Streets Alive! UCB artists gathered to inaugurate another round of utility boxes on the Telegraph and Downtown Berkeley areas.

The art was placed on Utility Boxes owned by the City of Berkeley, and was paid for by the University of California Berkeley’s Chancellor Community Partnership Fund.  Local artists were chosen to design original works based on the theme of “Sustainability,” and the University worked in partnership with the City of Berkeley’s Civic Arts Commission to select and approve the art.

Thanks to the $20,000 grant from the UC Berkeley Chancellor’s Community Partnership Fund, Streets Alive was able to work with UC Berkeley partners from the Office of Sustainability and UC Berkeley’s Office of Capitol Projects to place art on 7 boxes around the campus edge. The effort was produced by the Earth Island Institute’s Streets Alive Initiative, which aims to bring more art and nature to the streetscape.

A short reception on the steps of UCB's MLK Student Union was followed by a walking tour which included speeches by the artists who designed the box, a Q&A session with the printer and installer, Bay Area Sign Installation, and remarks from the University, the Earth Island Institute and Councilmember Arreguin. 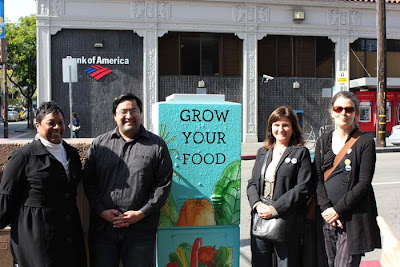